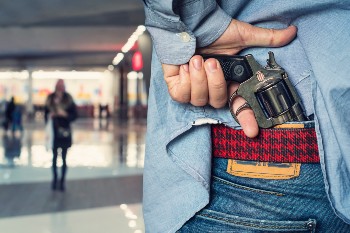 Armed robbery is a more serious criminal offense than common law robbery in North Carolina. You could face a lengthy prison sentence if you are convicted of this crime. However, you may be able to mount a strong defense to avoid the harsh punishments you face with the help of an experienced criminal defense lawyer.

What Is Armed Robbery in North Carolina?

Under N.C.G.S. 14.87, the crime of armed robbery is committed if the accused takes an individual’s personal property without their consent or permission through the use of a dangerous weapon that threatens or endangers the person’s life. The following elements of the offense must be proven beyond a reasonable doubt for someone to be found guilty of this crime:

A person can also be charged with armed robbery if they aid and abet in an armed robbery. Aiding and abetting can include acting as a lookout for the individual committing the armed robbery or encouraging them to commit the crime.

What Are the Penalties for Armed Robbery in North Carolina?

North Carolina uses a complicated sentencing system that takes into account many factors, such as the circumstances of the crime and the defendant’s prior criminal record, in determining their punishment. The sentence could include up to 204 months in prison. In addition, the penalties could include a hefty fine, lengthy probation, and restitution to the victim.

When Can the Punishments for Armed Robbery Be Enhanced in North Carolina?

The penalties for armed robbery can be more severe if an individual is charged as an armed habitual felon under N.C.G.S. 17-4.71 in North Carolina. It is considered a status offense that would be charged separately from the current armed robbery charge.

To be convicted as an armed habitual felon, it must be proven that the individual has one or more prior convictions of a gun-related offense under North Carolina, another state, or federal law. Under this law, a firearm-related offense is defined as a felony committed by an individual while using or displaying a firearm.

While someone charged as an armed habitual felon would face two separate charges, they would only be tried on the current armed robbery charge. If the case went to a jury trial, the jury would not know that the person also faced an armed habitual felon charge. If they convicted the individual of armed robbery, there would be another phase of the trial where the jury would determine whether the prosecutor proved the status offense.

If the defendant were convicted as an armed habitual felony, this offense and the current armed robbery crime would be considered a Class C felony. They would be sentenced to a mandatory minimum of 120 months in prison. The prison sentence could not be suspended, and they could not be placed on probation instead of being incarcerated.