How Probable Cause is Determined for DWI Arrests in Mecklenburg County

If you were stopped for drunk driving, you may be wondering if the police even had a legal basis for stopping you. Generally, an officer is permitted to initiate such a stop for if he or she has reasonable articulable suspicion (RAS) of drunk driving.

This means that if an officer can point to specific and articulable facts that you were engaged in drunk driving, he or she is allowed to make a stop of your vehicle for investigative purposes.

What is Probable Cause?

Legal standards that must be met during the stages of the DWI process:

In order for the police to arrest you for DWI in North Carolina, the arresting officer must know of enough reasonably trustworthy facts and circumstances sufficient to believe that you have committed or are committing DWI. Determining whether an officer had probable cause to arrest you for DWI is very fact specific and largely dependent on the totality of the circumstances of your case; that is, your case as a whole.

There are some common pieces of evidence that police will attempt to gather in every DWI case. To develop probable cause and justify arresting you for DWI, the officer uses numerous tactics in order to gain enough of these “reasonably trustworthy facts”.

Establishing Probable Cause for a DWI Arrest

During Basic Law Enforcement Training (BLET), all North Carolina police officers are trained on how to investigate a DWI. A great deal of this training relies on studies conducted by the National Highway Traffic Safety Administration (NHTSA) that have looked at the various behaviors that drivers consistently exhibit when they are driving while impaired. The officer is trained to look for these various behaviors, as well as other evidence, to develop probable cause to arrest you for DWI.

If an officer is investigating you for a potential DWI, his investigation usually begins even before his first actual contact with you. Prior to the officer turning on his lights and sirens to pull you over, he or she has likely already been observing your driving behaviors and there were enough visual clues exhibited to create reasonable suspicion for drunk driving.

These pre-stop visual clues include behavior such as failing to maintain proper lane position, speeding and braking problems, vigilance problems, and judgment problems. Click here for a list of visual clues used to determine reasonable suspicion for DWI stops.

Once a police officer stops you based on reasonable suspicion, the officer will begin watching for clues to develop probable cause to arrest you for DWI as they approach your vehicle. These post-stop clues are no longer based on your driving behaviors, but instead are largely observations the officer makes about you and your ability to do certain things. Below are some of the common clues an officer will look for when investigating you for DWI. 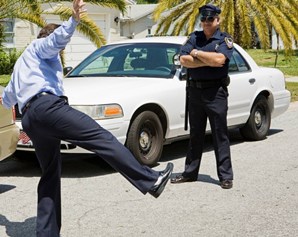 To establish probable cause and build a case against you, the officer will look for the presence of several of these clues. For example, a judge is most likely not going to convict you of DWI if the only evidence presented is that the police officer smelled the odor of an alcoholic beverage on your breath.

However, if a police officer detects the odor of an alcoholic beverage on your breath, he or she is likely to investigate to find further evidence. This evidence typically includes things such as an open container of alcohol in your vehicle, admitting to the officer that you were drinking alcohol, poor performance on field sobriety tests, or the results of a preliminary breath test revealing your BAC level.

As a police officer is able to gain more of this type of evidence against you, the State’s case becomes stronger. The less of this information you give to officer, the stronger your case will likely be.

Standardized field sobriety tests (SFSTs) and preliminary breath tests (PBT) are used by Charlotte police officers to assist in developing probable cause to arrest a person for DWI. While an officer will likely make you think you have perform these tests, the truth is that you don't. In fact, in North Carolina there are not even any driver's license implications for refusing to perform these tests. In fact, performing these tests is likely only going to hurt your case and give the officer probable cause to arrest you for DWI.

While classified by some as standardized, field sobriety tests are still slanted in favor of law enforcement and provide easy evidence for probable cause. Simply put, these test are tough to "beat" - even for a person who is completely sober. Trying to walk heel to toe in a straight line or attempting to stand on one leg without using your arms for balance are actions our bodies are not designed to perform. On top of that, it is likely that you will be asked to perform these tests under far less than optimal conditions. That is, you will likely be performing these SFSTs while highly nervous after being stopped by the police, at night with blue lights flashing all around you, and on the side of a roadway or highway where other cars are passing by.

You may refuse to blow for a preliminary breath test. And you likely should, as the benefits of refusing the PBT can set you up for a successful outcome further down the line. A positive result, meaning that alcohol is present on your breath, will further be used against you in the officer’s probable cause analysis. Your refusal to take this breath test cannot be used as substantive evidence to convict you.