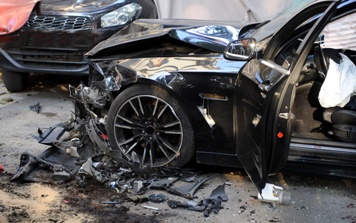 While it is often charged as a misdemeanor, DWI can be charged as a felony crime in North Carolina. If you were involved in a motor vehicle accident that resulted in an injury or death of another person, you may be facing felony injury or death charges. These are serious felonies that can result in stiff penalties that include a lengthy prison sentence. Our dedicated DWI attorneys are here to build a strong defense to help you achieve the best possible outcome in your criminal case.

The crime of felony serious injury by vehicle is committed if an individual unintentionally causes serious injuries to another person while engaged in impaired driving. It is a Class F felony.

Serious injuries are defined as injuries that cause someone to experience great pain and suffering. The court will consider many factors in deciding whether the injury was serious, such as:

The elements of this crime that must be proven beyond a reasonable doubt are:

It is not sufficient that the driver was impaired. His impairment must have caused the other person’s injuries.

Aggravated felony serious injury by vehicle is a Class E felony. To be convicted of this crime, the prosecutor must prove the same elements listed above and that the individual had another impaired driving conviction within seven years of the current offense.

Felony death by vehicle is the unintentional causing of the death of another person while engaged in the offense of driving while impaired. This crime is a Class D felony. The elements of this crime are:

As with the offense of felony injuries by vehicle, it is not enough to show that the driver was driving while intoxicated. It must be proven that his drunk driving caused the victim’s death.

If a person had a prior impaired driving conviction within seven years of this offense, the charges against him could be elevated to aggravated death by felony. This is a Class D felony.

Repeat death by felony is a Class B2 felony—one of the most serious felony charges. To be convicted, the prosecutor must prove:

Penalties for Injury or Death by Vehicle Felony Crimes

Felonies are serious crimes in North Carolina and are punished harshly. Your sentence would depend in part on your prior criminal record. You could face these punishments:

In addition to the length of the period of incarceration you face, you would also have a permanent criminal record. This can result in long-term consequences in your life, such as difficulty obtaining employment, loss of your professional license, and significantly increased vehicle insurance costs.