You Could Face Harsh Penalties If Convicted of Embezzlement in Charlotte 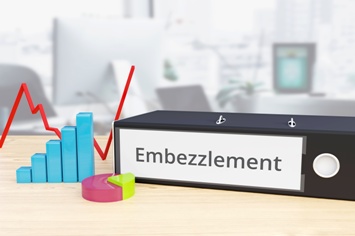 Embezzlement is a serious crime in North Carolina and is always charged as a felony offense. People from all walks of life and a variety of jobs can be charged with this crime. If you have been arrested for embezzlement or are a suspect in a criminal investigation, you need to retain an experienced criminal defense attorney as soon as possible to mount a strong defense to help you avoid the harsh punishments you face if convicted.

What Is the Crime of Embezzlement?

Embezzlement is a white collar theft crime. It is the taking of property, money, or other funds that are received due to the individual’s office or job, where the individual fraudulently and knowingly converts them for his own use. Basically, this crime occurs when someone is entrusted to manage money or other property and then steals it. While the offense is often committed in a corporate setting, this is not always the case.

Embezzlement can occur in one incident, but frequently happens over a longer time period with smaller sums of money or property being taken. Examples of embezzlement include:

Elements of the Crime of Embezzlement

The major difference between embezzlement and larceny is that the accused person is entrusted with the money or property due to their position when arrested for embezzlement. The elements of the crime that must be proven are:

Penalties You Face If Convicted of Embezzlement

The classification of the felony that is charged in embezzlement cases depends on the position of the accused to the victim and the amount stolen. Here is how this crime is charged:

North Carolina uses a complicated sentencing system that is based in part on your prior criminal record. If convicted of embezzlement, you could be sentenced as follows: