What are assault with a deadly weapons charges that I could face in North Carolina? 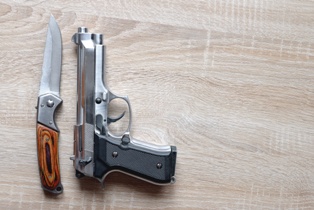 If you are charged with assaulting someone in North Carolina, you could be facing misdemeanor charges—even if you never touched anyone. However, you could be charged with a misdemeanor or more serious felony charge if a deadly weapon was used in the assault. A conviction can result in you being sentenced to prison and having a permanent criminal record. Because of these very serious consequences, you need to retain an experienced criminal defense attorney as soon as possible to help you build a strong defense to the charges that you face.

There are a number of specific misdemeanor assault and battery offenses that are considered more serious, and the charge is a Class A1 misdemeanor rather than the less serious Class 2 misdemeanor charged in many simple assault cases.

Assault with a deadly weapon is one of the more serious misdemeanor offenses. A person can be charged with this offense if he commits an assault, assault and battery, or affray if he causes a person to suffer serious injury or uses a deadly weapon. While a deadly weapon is not defined in the statute, it can include a gun, knife, blunt object, or another object that is not generally considered a deadly weapon but could be used to kill a person.

A misdemeanor assault with a deadly weapon carries these possible penalties:

You could be charged with assault with a deadly weapon as a felony if you committed the assault with the intent to kill or caused serious injuries, or both. What constitutes a deadly weapon is not specifically defined and includes a wide range of potentially dangerous objects. There are two levels of assault charges, and both involve these elements of the crime:

Are You Facing Charges For Assault With a Deadly Weapon?

Given the risk that you may be sentenced to prison if convicted of assault with a deadly weapon, you should do everything you can to fight the charges that you face. Even if you are guilty, our experienced criminal defense attorneys can raise defenses that could result in the charges being dismissed or reduced to a less serious offense. To learn how we have helped other clients facing criminal charges and how we can assist you, call our office to schedule your free case review today.