Extortion, Bribery, and Blackmail Are Different Offenses With Stiff Penalties in North Carolina 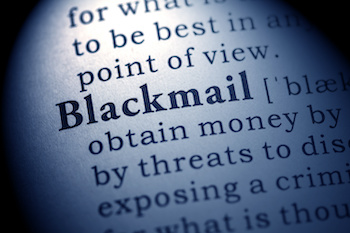 People may think that extortion, bribery, and blackmail are the same thing, but they are prosecuted as three different white-collar crimes in North Carolina. If you have been charged with one of these crimes, you could be sentenced to a lengthy jail or prison sentence if you are convicted. You need to hire a knowledgeable criminal defense lawyer who understands the differences in these offenses and will mount an aggressive defense to fight the charges you face.

Under N.C.G.S. 14.118.4, it is considered extortion for an individual to demand payment or another form of compensation in exchange for doing or not doing something. For this crime to have been committed, the prosecution must prove the following elements of the offense:

Examples of actions that could lead to a charge of extortion if there is a demand for money or something else of value include:

Extortion is charged as a Class F felony. The penalty can include a prison sentence of 10 to 41 months.

While blackmail may seem like the same offense as extortion, it is a separate crime in North Carolina. Under N.C.G.S. 14.118, this crime is committed if the defendant does one of the following:

To get a conviction, it must be proven that the defendant knowingly sent the writing to the victim that contained threats and demanded some type of property or securities from them. They must have taken these actions when they had no probable cause or reason to believe that they were entitled to the property they demanded.

Blackmail is a Class 1 misdemeanor. An individual could be sentenced to up to 120 days in jail if convicted.

While similar to extortion, bribery is a separate offense under North Carolina law. It involves exchanging money or something else of value to obtain the victim’s influence or other favorable treatment. The bribe does not have to be accepted for the crime to have been committed. The prosecutor may have difficulty proving that bribery occurred because it often does not involve a paper trail.

The victim or accused can be private citizens or businesses, or bribery can involve a governmental official. A person can also be charged with this crime for attempting to bribe a juror.

Like extortion, bribery is a Class F felony under N.C.G.S. 14.218. If convicted, a defendant could face the same sentence as for extortion.