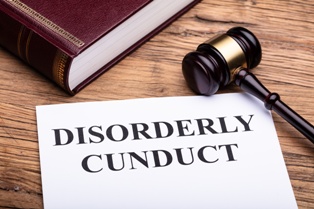 Disorderly conduct is a common charge that people are charged with in Charlotte. This crime is also referred to as disturbing the peace. If convicted, you face harsh penalties, such as jail sentence, hefty fines, and a permanent criminal record.

What Is Disorderly Conduct in North Carolina?

An individual can be charged with disorderly conduct for a broad range of activities. It is charged as a misdemeanor if it is the first offense. Under North Carolina Code § 14-288.4, disorderly conduct is a public disturbance intentionally caused by an individual who engages in the following types of conduct:

What Is the Penalty for a Disorderly Conduct Conviction?

A first offense of disorderly conduct is a Class 2 misdemeanor. If convicted, a person could be sentenced to:

What Is the Crime of Failure to Disperse?

Another corollary crime to disorderly conduct is failure to disperse. It is often charged when people are exercising their right to protest in Charlotte and throughout North Carolina. Failing to disperse is defined as not dispersing after a reasonable period of time and staying at the scene of an assembly or riot when told by a law enforcement officer or other official to leave.

There must an assemblage of three or more individuals. This crime can also be charged if a person congregates and creates a risk of injury to a person or property.

Failing to disperse is also a Class 2 misdemeanor. If convicted, a person would face the same punishments as for disorderly conduct.

If you have been charged with disorderly conduct or failure to disperse in Charlotte, it is crucial to understand that you may have strong defenses to the charges you face even if you believe you are guilty. They can be based on the inability of the prosecutor to prove the elements of these crimes beyond a reasonable doubt or violation of your important constitutional rights, such as your Miranda rights and your First Amendment right to free speech.

You must take immediate steps to protect your legal rights and help to build a strong defense to the charges you face. Here are important steps you should take: