Revoking a Will in North Carolina

While a last will and testament is executed during a person’s lifetime, the will does not become effective until the person’s death in North Carolina. Oftentimes, a will maker may change his or her mind as to whom he or she wants to leave his or her property. This change in mindset may because of a life altering event, such as marriage, the birth of a child, or divorce, or because of a new relationship with a person not previously mentioned in the will, or even because of a deteriorating relationship with a person who is to take under the will. If a will maker does change his or her mind after executing a will, the will maker can revoke it, so long as he or she still has the testamentary capacity to do so.

North Carolina General Statute (G.S.) 31-5.1 details the three methods by which a valid will may be revoked. They include revocation by (i) a subsequent writing, (ii) a physical act, (iii) or operation of the law. 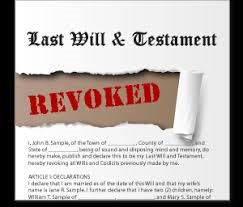 North Carolina G.S. 31-5.1 permits a will maker to revoke his or her will by executing a later written instrument. Unlike some states, North Carolina allows an entire will, or just a portion of the will, to be revoked. This revocation may be in the form of a subsequently written will, a codicil, or any other writing expressly declaring the will maker’s intent to revoke the will. However, the subsequent written instrument must be executed under the same formalities as are required for the execution of a will.

Revocation by Physical Act to the Will

If done in the correct manner, physically doing certain things to a will may be deemed enough to revoke the will in question. In order for a physical act to revoke a last will and testament, several elements must be met. Specifically, North Carolina G.S. 31-5.1(2) requires all of the following:

Revocation by Operation of Law

There are certain life events that commonly happen in a person’s life that may impact his or her last will and testament. People oftentimes have misconceptions about how the occurrence of these life events, whether it be marriage, birth of a child, or divorce, effects a will that was in place prior to the life event happening. The North Carolina General Statutes set forth how a will should be treated in various instances, some of which are discussed below.

If a person executes a valid will in North Carolina and then later gets married, the will is not revoked by the subsequent marriage of the will maker. If the will maker later dies with the will still being a valid will, his or her surviving spouse will be entitled to petition the court for an elective share of the estate even though he or she is not mentioned in the will that was executed prior to the marriage.

Marriage Plus Birth or Adoption of a Child

The general rule in North Carolina is that once a will is revoked it is considered to be legally dead and cannot be revived. However, the North Carolina G.S. layout four exceptions for revival of a revoked will.